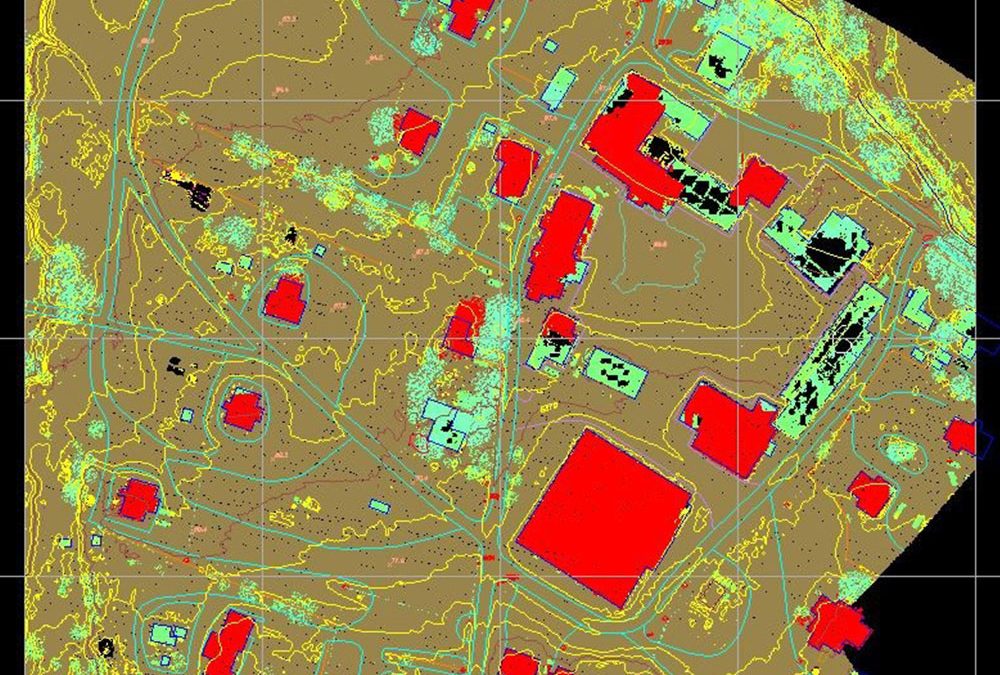 This project, which was broken into four task orders, was to perform design surveys for 180 miles of a 300-foot-wide corridor for proposed water infrastructure. We were also tasked with reviewing and plotting deeds, plats and easements from 25-year title searches for the 2700 private parcels within the boundaries of the Pueblos of San Ildefonso, Pojoaque, Nambe and Tesuque. Deliverables were to be in a GIS format.

Description
a. A Safety work plan was written and a review of all current Job Hazard Analysis (JHA) completed. Any recent safety issues were addressed in a revised General JHA or a specific problem with a new JHA. The Safety work plan was given to the BOR at the kickoff safety meeting where a schedule of field activities and priorities were established.
b. Prior to field work, an initial tool-box safety meeting was held with all crew members referencing current JHA’s.
c. The initial field work consisted of planning a GPS control network. 56 control points were set throughout the 23,770-acre project area. We collected GPS data for multiple sessions at different heights of receivers to ensure redundancy. The baselines were processed, and a fully constrained adjustment was completed. A surveyor’s report was prepared. The control points were ultimately used as panel points for the aerial photography. This control was shared and has been used by several other Reclamation contractors for the past five years. The control network was used by PSI for other work we have been hired to do for the Pueblos of San Ildefonso, Pojoaque, Nambe and Tesuque.
d. We recommended the acquisition of aerial photogrammetry and the collection of LiDAR data for the project although it was not identified in the task order. During our presentations to BOR, we explained the value of this data. BOR decided this was a benefit to the project. We hired Olympus Aerial out of Salt Lake City, Utah as our subcontractor for this work based on a good, long term working relationship our constituent, Goff Engineering, had with them. We had to secure permission to fly from all four Pueblos which was a challenge due to cultural activities at San Ildefonso Pueblo and privacy concerns of all the Pueblos. We were able to coordinate permissions and a flight date that was acceptable to all four Pueblos. The high-resolution photographs and Lidar data was successfully acquired in March 2013.

e. Together with BOR, we carefully tracked receipt of permission to survey forms, so the crews did not unwittingly enter a property we did not have permission for. Our GIS Specialist prepared maps for the crews showing who we had received permission from. The parcels were color coded. Green meant we had permission, red meant permission was denied and yellow meant we had not received any response from the property owner. We developed and printed door hangers. The crews could leave a door hangar for a property owner that had not responded. Our crews were able to gain permissions via the use of hangers, as well as by just asking for permission in the field. Due to the large amount of denials received based on residents’ opposition to the water system in general, there were many parcels we were denied access to which made the aerial photographs and LiDAR data even more valuable. Due to the opposition to the project and high tensions in the valley, for the safety of our crews, we made identification badges for our crews. They had the project name, the employee name and photograph and other identifying information. On the back of the badges, for crew use, we put emergency contact information which was crucial due to multiple agencies in the project area. Law enforcement agencies included BIA Police, Pueblo Police, Santa Fe County Sheriff, and New Mexico State Police throughout the area. To keep the public informed of our survey activities, we coordinated several Public Information meetings as we moved into a particular area and our Public Liaison also prepared and submitted press releases. We made presentations to all four Pueblo Councils to keep them apprised of our progress and we continued to work closely with them. We maintained documentation of comments received at the meetings.

f. The data collection effort by our four two-person crews consisted of a heavy emphasis on GIS data. Extensive work was done with our GIS subconsultant, International GIS, to develop a data dictionary acceptable to Reclamation. In addition to the typical coordinate and elevation data that is collected during a survey, the crews collected attribute data such as the condition of the object, the dimensions of the object, and a photograph. Along with those attributes, other fields were created as work progressed depending on the field conditions and the object encountered. Using the Trimble coding system, the crews were able to “connect the dots” in the field which saved a significant amount of time in the drafting of the plan and profile sheets. Our GIS Specialist took the field data and inserted it into the GIS database for the project. We rented an office from the Pueblo of Pojoaque which PSI continues to rent for additional work we were hired for by all four Pueblos. The Goff crews stayed in a Pueblo of Pojoaque owned hotel. We hired a total of four Pueblo members for this work who are still employed by Precision Surveys.

g. In addition to the data collection, PSI was responsible for the first phase of the right of way portion of the project. This involved the review and analysis of the 2,700 BOR provided title commitments. We plotted record boundary descriptions and easement documents. Parcels were moved to best fit the found property corners.

h. In addition to our weekly toolbox safety meetings, we had monthly safety and progress meetings with Reclamation. Our GIS specialist prepared videos for each meeting showing that month’s field work progress. This was a powerful tool and it was much appreciated by Reclamation staff.

i. We were also tasked with preparing a Wide Area Network Design Plan with New Mexico OneCall for the coordination of utility locates by the numerous stakeholders in the project area. This was the first project done under this system. We had a kickoff meeting to explain the project to the stakeholders which included Jemez Mountains Electric Cooperative, PNM, CenturyLink, Comcast, Pueblo Utilities, New Mexico Gas Company and other small utility operators.

j. We had to also coordinate traffic control permits with NMDOT. We had to schedule around Pueblo closures for traditional activities or for the death of a Pueblo member. We did not schedule work along the route of the traditional pilgrimage to El Santuario de Chimayo during Holy Week. We modified our work plan due to construction. We had to deal with irate property owners, mean dogs, traffic, wildlife and bugs, river crossings, bad weather and many other challenges. Despite these challenges, we finished the project ahead of schedule despite being granted a 90-day extension due to delays outside our control at the start of the project including the Government shutdown and the scheduling of the aerial photogrammetry with the four Pueblos.
This work garnered our team a rating of “Very Good” for Quality, Schedule, and Challenges on our CPARS evaluation.